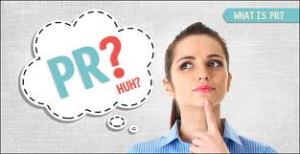 I’ve noticed over the past few months in particular, that nobody other than PR practitioners (or indeed those in a communications role) actually understand what public relations actually is. After I graduated in July of this year, I went for an interview that was entitled ‘Marketing Trainees Wanted’. Now I thought that this was perfect for me, as I had just finished a 3 year Public Relations course and felt that jumping in to a full time PR practitioner role was a big leap from learning about the sector. I attended the interview and was told that it was definitely not a sales adviser role, but one that allowed me to progress quickly through an ever growing company whilst allowing me to progress my marketing and PR skills.

After leaving the interview feeling positive, I then got a call that evening letting me know that I had been invited to attend an open day. Long story short, I attended the open day, to find that my job for the next 12 months would be standing in various shopping centres throughout Yorkshire attempting to sell various products and services to shoppers. I weighed up my options and decided to leave the open day that wasn’t the job that was advertised to me.

I find it hard to accept people using the term ‘PR and marketing’ so freely and just conning people to believe they are getting one thing but actually it is something completely different.

The definition of Public Relations according to the CIPR is:

“Public relations is about reputation – the result of what you do, what you say and what others say about you.

Public relations is the discipline which looks after reputation, with the aim of earning understanding and support and influencing opinion and behaviour. It is the planned and sustained effort to establish and maintain goodwill and mutual understanding between an organisation and its publics.”

I obviously know the definition of PR, it’s hard not to know it after studying it for 3 years solid, but to someone who doesn’t understand the business aspect of PR, could quite easily think that the people on the streets handing out leaflets to passers by for the latest club night in the city centre are doing PR. They’re not, they’re handing leaflets out, BIG difference in my eyes!

As with most career sectors, if you don’t know about it, you come to your own conclusion about what the day to day roles of that job is. I find with PR, that it is often dumbed down a lot, especially with it being included in the ever so popular Sex and the City, where you see popular character Samantha Jones living the high life as a huge PR director. If I’ve learnt anything over the past 3 years, its that PR is nothing like what you see in the movies!

All in all, PR takes time and meticulous planning abilities, it is not a simple hour meeting where you can bash out the objectives and see results by morning. It’s something all businesses and organisations need to be successful, it is not to be taken lightly!